In Ukraine and Georgia this "game" called "Forced Сohabitation" 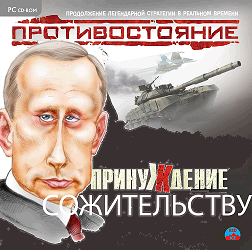 From the reviews on ag.ru (The Biggest game-portal in Russia)):

Not the first and certainly not the last game, the creators have made a bet on the «scandalous», spit on the quality and the remaining ingredients for success ( «Stalin against Marcial», «Eugene Onegin» or «The truth about the ninth company» in this respect, a little nicer) . What is there to argue? Anyway that surround s*** lying on the sidewalk and begin a broad discussion with the press and television. It is unethical to defecate in the street? What are the political implications? Should I look for national motives here? Human greed and stupidity have no limits. Yes, gentlemen of the «Russobit-M», and Red Ice?
http://translate.google.com/translate?p ... ry_state0=

From Fireglow interview:
Red Ice, the name under which the company steals intellectual property from other companies. The exact location is unknown, presumably in the CIS and Russia. Domicile not advertise. The list of sponsors in the products of this company did not indicate why not know who these people are. But What is known, Stealing INTELLECTUAL PROPERTY....
Ludmila Ludvig Fireglow Games
http://translate.google.com/translate?p ... 0%B8%D0%B3


bit is ...Shared by digital downloads with till3 reinstalling...
In install hiden noCD blacksea.exe...


In the super-geme many new features!

You can order to President of Georgia.
Fill him with gasoline, and Russian paratroopers by alcohol.

U can find new country "Poland-Georgia"!

Try to introduce him to the guillotine (not can!)
To seize a the United States ship stuck in the mountains .

Shadows of the helicopters and planes will be the other side (the effect of global warming).
With helicopters and airplanes careful - do not let a lot of jobs, more self-bang!

blacksea.rar
A file found in the install of pirates. File removes protection from pirate "products" Russobit-M "and" Red ICE "-" Confrontation. To engage in peace, "etc. Replace the same and run. Based on the fact that the engine "Sudden Strike: Resource War" was stolen "Russobit-M" and "Red ICE" from Fireglow and 1C. Should apply to other "products" of pirates in the Law - "Confrontation. Europe 2015", "Confrontation. Battle for Black Gold", but if not suitable, the HEX word in it, we'll find blacksea.ini and change it that these barygi is written there.
(26.26 KiB) 299-mal heruntergeladen

The files are interchangeable, but in the first amended and copyrights replaced by copyleftsl and changed title of Ini file.

are Modifications for "BLACK GOLD " ?

It is special for 12 old chilren sale only in countries where not run low about intellectual property - all in Russian...

I don't understand, but what is the problem with RCM-Basis?