[RWM] The Battle of Charkow - making of

Idea
In late 2016 I had idea about big city map for 6vs6 players. Such map was missing in RWM multiplayer community.
Most of maps are open area with forests, fields, few small cities, villages and lonely houses.

I made few multiplayer maps before:
- Stalingrad, circa 10 years ago, it was crap
- Some winter map, also very bad
- Belarus, variation of famous Operation Bagration map, it isn't good but at least it have some concept

Now was time for the "masterpiece" :)

Historical background
I wanted something between years 1943-1945 (better units in this era), Panthers, Tigers on Wehrmacht side, T34/85, big SPG's on Red Army side. RWM winter scheme is limited by number of objects and buildings. Also there are some issues with bulding destruction, for some you need atomic bomb. Better choice is use another schema, the richest is RWM-Eastfront summer.
Aftera  selection, I was happy with Kharkov battle (https://en.wikipedia.org/wiki/Battle_of_Kharkov), without winter scheme was Belgorod-Kharkov Offensive winner. But of course, the battle for the city was more intense in previous events. Limitations:
- max. 800 buildings per map
- object limitation is 100 000 per map (is possible to have more, but why unnecessarily exceed the limit)
- terrain (hills), building distribution and river/bridges must be fair for both sides, otherwise it's very problematic in multiplayer in terms of balance
- map size - 512x512 is too big and 256x256 too small.. 384x384 is best for 5v5 and 6v6, number of players and map size plays a big role, players are usually unable fix holes in defense if they have to handle larger areas
- expectations of the community (maps that are played), skill of players Mapmaking:
There is more options, we can get historical map or use Google maps, I found city map from the beginning of 20th century, it takes maybe 1/10 of city area. MapImage utility can convert image from Google maps into Sust map, which makes map making process easier, but be carefull, ratio between map image and Sudden Strike map must be +- correct. Also I checked how other mapmakers are making their nice looking scenery. Then I started with terrain and objects. 384x384 map tiles size is long term process, it took a year, it was something like 1 hour per day, with long pauses. The biggest challenge is to maintain the appearance of city panorama look, streets must have some sense, building have some arrangement. With 800 building per map limitation it can be problematic. It looks better on my next map Berlin Centrum (256 x 256 size), the house area is more dense and they are in houseblocks. Here I chose more wide streets.
Later I spent time on few locations like Gosprom complex in the center with circular square which is characteristic of this city. Map is not super detailed, some places are still undone.

Multiplayer script
When map is done, this is really quick, you can have script in few hours. We are using similar scripts and units balance which is proven by time. I wanted to revive it a bit, so I put there waves of infantry without any transport vehicles, they come in 3 phases, at beginning you can take all defense position, secure airfields and later during the game their role is boost attack and secure positions (buildings) in the city.
Biggest issue in RWM is that USSR units are really mobile and Germans bit slow, it needs good ratio of fast and slow tanks. What I don't like is too many units, too many anti-tank guns which are making gameplay static. The tanks have main role, you can make fast attacks with infrantry support and go through enemy positions. But rather with the support teammate on the wing. There are several defensive factors - terrain (hills) + trenches + static guns (88mm), buildings, players have cca 5 pioneers, 3 right from the start. Long range artillery may have big role here. Some players don't like it's firepower but how can be battle in city without heavy guns? :) And it also makes players more mobile. I put 2x static 305mm BR-18 which are controling defensive area (picture under text). And 4x 280 G BR-5 which can be towed. Plus equivalents of this on the German side. Obtaining ammunition for big guns is time consuming, it's not easy control it effectively.

Airfield if funny thing too, map have 2 big airports and 2 small, they can be used if you can protect them.

The first multiplayer game
After few fixes it was +- working as it should, players of both sides were in their positions at the same time, then came intense house to house fighting in built-up areas. Players were spending their time by capturing buildings (It can be problem for new one's), bonus is in bigger view and in defense boost. There was problematic area in bottom corner, which was fixed by defense lines, it's still an attractive place to attack but if you have some tactical thinking it's not big deal. Anyway balancing 6v6 map isn't easy.

How good or bad Charkow is you can see on videos :) Or you can join our multiplayer community.

Description:
We have new map capturing the battle in the center of Berlin, end of April 1945. Map is little bit different from the classic schema. Germans are here rather in defensive situation, Red Army have lot of Katyusha's and heavy artillery, storm units and more infantry. Germans have only city blocks in their back and bad prospects. 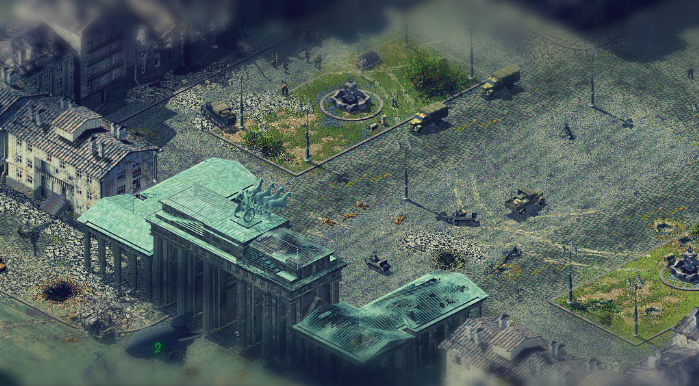 Anyway, everybody who want play with us is welcome!
Please visit this page for more information: http://www.sudden-strike-maps.de/phpBB2/viewtopic.php?f=144&t=18348